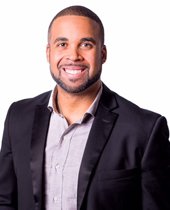 Aspiring to help with a drive for excellence and a passion for life.

DJ Williams knows what it is like to overcome adversity and to strive for excellence! As a child of an abusive father, DJ knew that his mom and sisters deserved better. He encouraged his mother to leave that situation and that led them to Arkansas. In Arkansas, DJ thrived. He attended Central Arkansas Christian High School where he thrived in football. He was named all-state and was a 4-star recruit.

After graduating, Williams played college football for the Arkansas Razorbacks. His dedication and passion were evident on the field. While in college, DJ won the Disney Spirit Award as college football’s most inspirational figure. He won the Mackey Award as the country’s best tight end in 2010 and went on to play in the NFL. He was first drafted by the Green Bay Packers in the fifth round and later signed with the New England Patriots and the Tampa Bay Buccaneers. D.J. was signed by the Washington Redskins in Aug. 2015 but an injury kept him from making the roster.

DJ brings that same passion and driven attitude to real estate. Buying and selling a home can be a stressful time. DJ helps to take all that stress away with his dedication to every task before him.

Williams is a member of New Life Church. He joined KARK 4 Today as co-host in January 2015. He is also part of the Pig Trail Nation team during football season. He has been an advocate for victims of domestic violence and has shared the personal story of his own family leaving his abusive, drug-addicted father when Williams was a child.